What’s the secret to a good open relationship?

Have a good relationship.

That’s a big one. When did we learn to have a good relationship? On TV? In movies? Pop songs? from pour parents? (a few people did learn it from their parents)

Millions of gallons of ink have been spilled on the subject, multiple forests of trees ground up into pulp for all the books about how to have a good relationship, and still I can’t help to look around and think a lot of people haven’t gotten the memo.

Like most skills, it seems really hard until you know how to do it, and then it seems pretty easy. As an educator I love digging around in the guts of this, but as a writer it’s like trying to peel apart fractals. Each layer of unpacking the things you need to have a good relationship is still something you could write about for a lifetime.

Still, I’ll do my best to at least name the basics here.

Communication. Ain’t nobody gonna read your mind. We don’t know what you are thinking or feeling or wanting unless you tell us.

Asking for what you want. (see above)

Learn to hear “no” and be ok. Look at the last two on the list. If you are asking for what you want but getting but hurt when you here a no you aren’t celebrating others’ autonomy.

Learn to say no. Let’s assume that you are going to be in relationships with other people. They are going to have their wants and needs, and if you don’t have good boundaries (look above, part of emotional intelligence is the boundary of knowing that their emotions are their own) and know how to say “no” when you need to, then your relationships are going to chew you up and that’s no good for anyone. Think about it from another view. Deep down inside, if you are asking for something from someone you care about, wouldn’t you rather hear a “no” than have it given with begrudging anger and resentment?

Learn to deal with your own jealousy. This one follows naturally from your emotional intelligence. If you feel jealous that is your own feeling. Which is not to say that “you shouldn’t be feeling it” I would NEVER say that. Many many people experience jealousy. Monogamous people, people in open relationships, in all other kids of relationships besides romantic ones. Jealousy is a real emotion, and it sort of sucks, but you still have to learn to deal with it. Gloria and I teach a three hour course on Jealousy. I’m not going to try and and lay that all out in this blog post. Just know that jealousy is not a special case of emotions that gives you a pass on your emotional intelligence. Jealousy sucks to feel but you have to be willing to feel jealousy more that you want to control someone else’s behavior.

Hang out with other people in open relationships. This is important for a few reasons.

First off, these are great people to date. While it is possible to meet a person who has never heard of open relationships or polyamory and have a good experience, it’s rare. Even in the best case scenario, a person who has been looking for something like open and poly for their entire life but just didn’t know it was a thing, they still are going to be missing some of the language and relationship technology. More likely someone who isn’t already poly isn’t ready to be poly and you trying to convince them that it is a good thing is a risky click.

But finding dates isn’t even the most important reason why hanging out with other poly people is a strategy for having a good open relationship. Doing open or poly is (to put it unscientifically) weird. It goes against the cultural grain. It’s hard to do already, but made so much harder by being so different than what everyone else is doing. There is uncertainty, maybe some internalized shame. It can feel isolating and confusing. If every time you talk about how you are trying to have an open relationship people spew negativity at you (or their head explodes) it’s going to be difficult. 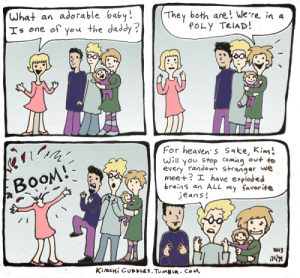 Hanging around other poly or open people gives you the ability to say things like “I slept with my girlfriend’s boyfriend” without cleaning an exploded head out of your clothes. Even better, they might react to it positively. Hearing “wow, that’s great” feels a lot better than “you make me sick” and it can have a big effect on your wellbeing and the wellbeing of your relationship.

When you hang out with other people that are poly and open, all of those conversations that people have about their confusing relationship structures, their adventures, their setbacks, their victories; you get to have those conversations without a defensive explanation of what the hell you mean and why you aren’t a broken pervert. It allows for more depth in your thoughts on the subject, and it just normalizes things which is a great antidote to any internalized shame you might have for being “weird”

And allow me if you will to end this post with a final piece of advice that is a little self serving. If you need a coach you should get one. It’s funny, if you wanted to learn guitar or boxing or tax law nobody would think twice if you took classes or got a coach or teacher. Having good romantic relationships is really hard. Getting someone to help you can smooth out a lot of the problems. By definition we can’t see our own blind-spots. Getting help can really accelerate the process of getting into a great space with a great open relationship.

2. There’s a damn good reason why it’s hard for some ppl. Abusive and oppressive histories and cultural forces are the bedrock. Yes, education is needed but it’s more difficult due to emotional intelligence and white racial awareness being deliberately suppressed.

3. Accounting for traumas (and there are a shit-ton), is important